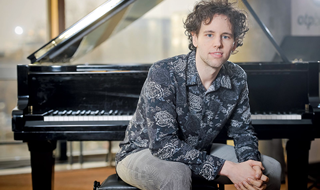 A keen chamber musician, Aljoša Jurinić performs in duos with the world-renowned musicians Petrit Çeku (guitar) and Luka Šulić (cello), the latter collaboration earning the prestigious Orlando Award at the 70th Dubrovnik Summer Festival. His discography includes a solo album, Chopin Alive, recorded at an all-Chopin recital published under Cristoforium Art, a CD box set of highlights from the 2016 Queen Elisabeth Competition, and his performance of R. Schumann’s Piano Concerto in A minor, Op. 54, at the 2012 Robert Schumann Competition. In 2020,he released an album under KNS Classical featuring live performances of R. Schumann’s Fantasy, Op. 17, and F. Chopin’s 12 Etudes, Op. 25.

Aljoša Jurinić holds a Concert Diploma (Konzertexamen) from the University of Music Franz Liszt Weimar, where he studied under Grigory Gruzman, and a Master’s Degree from the Academy of Music of the University of Zagreb, where he studied under Ruben Dalibaltayan. Other teachers who have contributed to his artistic development include Eliso Virsaladze, Noel Flores, and Jasna Reba.

It is not much of an exaggeration to say that if it were not for the 32 Beethoven piano sonatas there might be a lot of concert pianists out of work. They are the staple of every piano student’s education; the subject of more analyses by more critics and interpreters; and the selections found on more concert programs than most other topics of musical interest. They are wonderful, inspired pieces that pianists just keep on playing.

Among the most popular—and challenging—is the ‘Waldstein’ Sonata No. 21 in C major. Composed in 1804 it comes from Beethoven’s powerful middle period, a time of abundant composition. The three-movement sonata is filled with a charged energy typical of some others of Beethoven’s works, notably the great Kreutzer violin sonata and his piano concerti numbers three and five.

Its nickname comes from Beethoven’s association with Count Ferdinand von Waldstein, a wealthy aristocrat who financed Beethoven’s move from his birth city of Bonn to Vienna in 1792. It was this benefactor to whom the composer dedicated the C major sonata. A note from the count found in one of Beethoven’s diaries reads:
Dear Beethoven: you go to realize a long desired
wish—the genius of Mozart is still in mourning.
By incessant application, receive Mozart’s spirit
from Haydn’s hands.
It’s interesting to note that although Beethoven did study under Haydn their relationship was less than beneficial. Beethoven claimed he never learned anything from Haydn and Haydn in turn insisted he was “bewildered by Beethoven’s compositions.”

Thankfully, what seems to have been ‘beneficial’ was Beethoven’s choice to ignore whatever compositional advice came from Haydn.

Schumann’s 1836 C Major Fantasy stands as a landmark in the entire scope of Romantic piano literature, even though it was not an immediate success. The work was dedicated to Franz Liszt, the eminent pianist of the day, who refused to play the piece in public insisting it was too technically difficult. This may have been the result of the emotional upheaval going on in Schumann’s life at the time—that of his devotion for Clara Wieck, a young woman with whom he was desperately in love. The first movement’s surging melodies and structural variations may well have found their source in the composer’s heightened emotional state. Schumann’s first title for the piece was Ruines, an expression of distress at being separated from his beloved Clara. Evidence of this is found in a note he wrote to Clara sometime after their eventual marriage: “You can only understand the Fantasy if you go back to the unhappy summer of 1836 when we were separated”.

The work was not published until 1839 after a number of Schumann’s rigorous revisions. It has since become a popular recital piece performed by a number of pianistic luminaries, among them Martha Argerich, Vladimir Ashkenazy and Vladimir Horowitz.

As a child André Mathieu was unusually precocious, speaking his first words at age four months and taking his first steps before seven months. His father was a music teacher and composer, and his mother a cellist and teacher. From an early age André was fascinated by the world of music, and received his first music lessons from his father. In 1936, at a mere seven years of age, he performed his Concertino No.1 for Piano and Orchestra as a soloist on the CBC network. He was later given a grant by the Quebec government that enabled him to go to Paris and study piano.

As a composer Mathieu's style leaned towards the late Romantic school influenced by Debussy and Rachmaninov. He wrote many works for piano, among them the compositions of his youth: Trois Études (1933), Les Gros Chars (1934), Procession d'éléphants(1934), Trois Pièces pittoresques (1936), Hommage à Mozart enfant (1937), and Les Mouettes (1938), and Prelude Romantique (1940).

Completed on June 4, 1841, Mendelssohn’s Variations were his contribution to a large fundraising campaign for the erection of a statue in honor of Beethoven in Bonn. The 17 variations that make up the work appeared in an album entitled the‘ Beethoven Album’ which also included original compositions by Liszt, Chopin and, as indicated in the previous program notes, Schumann’s Fantasy in C Major.

The performance time for Variations is about 11 minutes and requires considerable virtuosic ability, as is the case with most of Mendelssohn’s piano works. The composer’s closest friend, Ignaz Moscheles, a gifted concert pianist, was quoted, “I play the Variations Serieuses again and again to enjoy the beauty again.” The work covers a wide range of emotions including andante sostenuto, agitato, allegro vivace, adagio and a final presto.

Franz Liszt was a dozen people in one, his long life filled with often disturbing upheavals: religious zeal; attempted homicide; enough love affairs to fill several diaries; more than a dozen occupations having nothing to do with music; a future visionary with a compulsive view to his own destiny; and an intellect bordering on genius—an unquestionable challenge for any biographer. He became one of the most notable pianists of his time, virtually a preeminent sensation throughout all of Europe. He was the first pianist, in fact, to give a solo recital, refusing to share the stage with any other artist.

Yet, throughout it all, Liszt never forgot his Hungarian roots. Evidence of this is found in the composition of his 20 Hungarian Rhapsodies for Piano, 19 of which were produced between 1847 and 1885. (The 20th of these has never been published.) It is the music with which his name is most often associated. Taken as a whole the Rhapsodies make a profound and definitive statement about Hungarian Gypsy music.

Completed in 1847, the No. 11 is one of the shorter of the set. It is structured in four continuous sections, the first two slow, the second and third much more lively. At no time during the entire work does Liszt leave the listener without excitement and pianistic thrills. Ultimately the piece is an experience of memorable and dazzling themes.