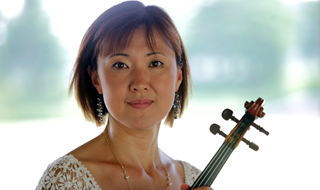 Since 2011, world-renowned violinist Etsuko Kimura has served as Concertmaster of the Ontario Philharmonic Orchestra, one of the province’s leading ensembles, led by acclaimed music director Marco Parisotto. She is also the Assistant Concertmaster of the Toronto Symphony Orchestra since 2007. Known for the passion, energy and imagination that she brings to her music, Ms. Kimura appears frequently at concert halls across Canada and the world, leading eminent chamber ensembles, appearing as a featured soloist with major international orchestras, and maintaining a full recital calendar. Her recordings are often heard across radio networks like the CBC, and the Toronto Star has praised her "thirst for making music."

Ms. Kimura has led numerous premier ensembles as concertmaster over the years, including the Kobe City Chamber Orchestra in Japan, and Sinfonia Toronto, the world-class chamber ensemble. She is also the Concertmaster of Toronto-based chamber orchestra Group of Twenty-Seven (g27), where she performs alongside many of Canada’s top classical musicians, under maestro Eric Paetkau. When she is not performing with the Toronto Symphony Orchestra, she serves as a guest concertmaster for orchestras in Japan and around the world.

In addition to her work as a concertmaster and ensemble leader, Ms. Kimura has performed extensively as a soloist, giving frequent solo recitals and collaborating with many of the world’s best musicians, musical directors, chamber groups, and orchestras. She has performed as a guest artist with the Budapest Ferenc Erkel Chamber Orchestra and the Szombathey Radio Orchestra in Hungary, as well as with orchestras throughout Japan, including the prestigious Osaka municipal symphonic band. A highly sought after collaborator, she has appeared on stage with such eminent violinists as NHK Symphony Orchestra concertmaster Masafumi Hori, former Berlin Philharmonic concertmaster Toru Yasunaga, and international soloist Tomotada Soh, and performed with Nobuo Okada, the former principal violist of the Bamberger Symphoniker-Bayerische Staatsphilharmonie.

Born and raised in Japan, Ms. Kimura began playing music at the age of four. She studied violin performance with TomotadaSoh, earning Bachelors and Masters Degrees at the Osaka College of Music and graduating at the top of her class. In 1992, Ms. Kimura was catapulted onto the international stage as the winner of the 24th Joseph Szigeti International Violin Competition, and began to receive invitations to play recitals in Tokyo, Osaka, and throughout Japan. The following year, she won a scholarship from Japan’s Rohm Music Foundation to study as a special post-degree student at the University of Toronto with Lorand Fenyves, widely considered to be one of the world’s best violin instructors. She also studied at elite workshops such as Hungary’s Bartok seminar, Switzerland’s Rohm Music Foundation camp, and Canada’s Banff Centre camp. In 1997, she moved permanently to Canada, where she has become known as one of the country’s most compelling musicians. Ms. Kimura currently teaches violin performance at the University of Toronto. In high demand as an instructor, she leads master classes all over the world in violin performance and chamber music, as well as teaching students at Canada’s Interprovincial Music Camp and in workshops at schools worldwide. Ms. Kimura stands out as a musician who is not only a virtuoso performer, but also one who is highly involved in bringing music to the community: she participates in the Toronto Symphony Orchestra’s adopt-a-player school outreach program, as well as performing regularly at hospitals and other venues where she can use her musical talent to touch lives.

Original sketches for the symphony appeared between 1800 and 1804 at a time when Beethoven’s personal life was in a state of unrest. Barely into his thirties, he was already struggling with impending deafness. Added to this was the political upheaval in Austria and the Napoleonic occupation of Vienna, both of which weighed heavily on his patriotic sensibilities. His notebooks reflect a creative effort fraught with turmoil and dissatisfaction: scratched-out phrases, crossed-out notes, superimposed notations—all an angry mass of ugly ink blots and unintelligible smudges. According to the composer’s friend Friedrich Schindler—commenting on Beethoven’s state of mind—the work’s repeated four-note theme meant, “thus fate knocks at the door”.

The entire first movement is structured around the four-note phrase, passing back and forth among the sections of the orchestra, amassing power is it goes.

In contrast, the second movement is melancholic and sedate, wherein two evident themes with variations emerge—as in the character of a song.

As the third movement begins, a shadowy theme presents itself, promising mystery and foreboding. Significant to note is the return of the same four-note motif found in the first movement. Also of significance, more recently, is that in Morse Code, three short dots and one long—the first movement’s pattern—stand for the letter ‘V’ which became the victory symbol used by nations coming out from under the thumb of Nazis.

In 1872, the young Johannes Brahms expressed: “I shall never write a symphony! You can’t have any idea what it’s like to hear such a giant marching behind you!” The “marching giant” of course was Beethoven, whose music set such an unreachable standard that it was beyond Brahms’ compositional imagination to ever equal it. But…reach it he did. Four years later the first of his four symphonies was completed and his doubts as a symphonic composer were set aside. In October, 1885, the last of the four great Brahms symphonies, the No. 4 in E minor, was performed with Brahms himself conducting. A notable critic at the time and close friend of the composer, Eduard Hanslick, was actually one of the page turners at the work’s premier. As one of Brahms’s closest friends, Hanslick likely had some influence on Brahms's composing; he often heard the composer’s music before it was published. He would later write, “For the musician, there is not another modern piece so productive as a subject for study. [This symphony] is like a dark well; the longer we look into it the more brightly the stars shine back.”

During performance the work gains an almost spiritual existence full of introspection and joy, and in turn, severity and exhilaration. Brahms’ closest musical confidant was Clara Schumann, herself a gifted pianist and composer, who remarked, “It is as though one lay in Springtime among the blossoming flowers, and joy and sorrow filled one’s soul in turn.”