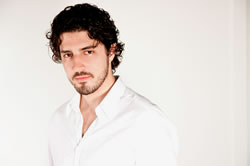 "Ciufo is an expert at telling the story – creating and capturing musical and/or cinematic moments…a keen romantic sensibility, deadly intonation, excellent taste, high musicality and a deeply communicative approach insure that Ciufo is well on his way to International recognition”
-Lesley Mitchell-Clarke (The WholeNote)

“Everything seems to be in place for mainstream success”
- John Terauds (musicaltoronto.org)

Michael Ciufo’s young career has explored performances across the globe, including an unforgettable performance at the age of 17 at the Pantheon in Rome, Italy.  His sophomore album release of Momento, debuted at #15 on the Canadian Classical charts.
Michael maintains a busy performance schedule and has just returned from a special performance for the re-launch of the newly renovated Canadian Museum of Immigration at Pier 21 in Halifax, Nova Scotia.

Previous to that, Michael spent much of the winter and spring touring the southern United States and performing to sold-our audiences with pop-opera vocal group, Vivace [vee-vah-chay]

His most recent operatic performances include the role of “Alfredo” in La Traviata in celebration of Giuseppe Verdi’s 200th birthday in Fidenza, Italy and “Gernando” in the Canadian Premier of Rossini’s opera Armida with Opera in Concert in Toronto.
Michael is humbled by opportunities to give back to his community.  He continues to donate his time and talents to a number of causes, and sits on   adjudication panels and special arts initiative committees throughout Mississauga.