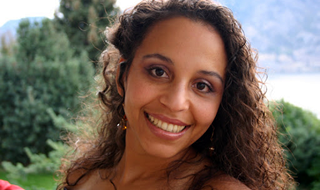 Considered “One of the brightest new lights in the classical world” (The Vancouver Sun), Cuban-Canadian pianist Beatriz Boizán is admired for her vibrant personality, charismatic stage presence, unique musicianship and innate talent to deliver breathtakingly authentic innovative performances of Spanish and Latin American music, for which she has been encouraged by her teacher and mentor, Mme. Alicia de Larrocha.

Born in Baracoa, Cuba, in the heart of a musical family, she began cultivating her gift as a child under the guidance of her grandmother Esclarecida Guilarte. After graduating in 1995 with honours from the National School of Music in Havana, she moved to Canada to further her musical training. She first attended Vancouver’s Community College King Edward Campus, followed by the University of British Columbia where she obtained her Bachelor of Music degree and studying principally under Professor Rena Sharon. She then received a Master in Music at the University of Alberta in 2004, studying under Dr. Jacques Després.

Ms. Boizán has perfected her craft with eminent personalities of the piano such as Leon Fleisher, Jerome Rose, James Parker and György Sandor, as well as with the great Alicia de Larrocha, who was an important influence on her.

She has performed on many concert stages around the world, including with orchestras such as Orquesta Sinfónica de Oriente, Santiago de Cuba, Edmonton Symphony Orchestra at Winspear Centre, Ateneo de Sevilla, Spain, Sala Auditorio Conde Duque and Sala Manuel de Falla of the Sociedad General de Autores y Editores, Madrid, among others.

As a recitalist, she has performed a vast repertoire including works by Scarlatti, Bach, Haydn, Mozart, Beethoven, Chopin, Debussy, Liszt, and many others. She holds a special affinity for works by Spanish and Latin American composers and has been an important exponent of this repertoire. She is recognized for her brilliance and striking sensitivity in works by composers Soler, Granados, Albéniz, Falla, Turina, Ginastera, Lecuona, Saumell and Cervantes.

In a performance organized by the Fundación Autor of Sociedad General de Autores y Editores (SGAE) in Madrid, as a tribute to composer Joaquín Turina on the 60th anniversary of his death, Ms. Boizán performed works by the prestigious composer and his grandson José Luis Turina, the most prominent composer of contemporary Spanish music. In reaction to Ms. Boizán’s playing, Mr. Turina stated, "She surprises by her sensitivity, her pianism and her incomparable and masterful sound."

In 1967 the royalties coming to Mozart from a movie about the doomed romance between a handsome dragoon officer and a beautiful circus performer would have made him a wealthy composer. The Swedish film Elvira Madigan garnered awards from both the Cannes Film Festival and Golden Globe Awards. The soundtrack was taken directly from the Andante movement of Mozart’s Piano Concerto No. 21. So familiar is the music that the entire work has been nicknamed the “Elvira Madigan” concerto. Although the film has lapsed into insignificance, the music remains as one of the most recognizable melodies ever penned. Be surprised if you haven’t ridden in an elevator or bought groceries without Mozart’s Andante as background accompaniment.

The concerto actually began life in 1785 in Vienna during a period of intense Mozart activity. Musicologist Neal Zaslaw describes it: “…a period of 27 days during which Mozart also taught pupils; held a quartet party to write and play music dedicated to Joseph Haydn; and participated in another dozen or so public and private concerts.”

The Piano Concerto No. 21 follows the familiar Allegro Maestoso—Andante—Allegro Vivace structure. The first movement begins as a march which quickly becomes lyrical growing in volume and intensity until the introduction of new material by the piano. As is the case with most composers of classical music, Mozart borrowed liberally from himself. There are, in this movement, echoes of passages from his Symphony No. 40 and his Third Horn Concerto.

Now comes the famous “Elvira Madigan” Andante, music so deeply moving, it emphasizes the incomparable genius that is Mozart. The entrance of the piano in this movement is a nocturnal wonder in its apparent simplicity. The constantly undulating, pleading triplet figure is likely what made it an obvious choice for the film maker’s tragic love story.

Then as if in complete contrast to the emotional intensity that went before, Mozart decides to serve up some cake and ice cream. This Vivace movement is a romp in a wide-open space with the piano and orchestra trading quips and witticisms back and forth, the composer’s musical interpretation of “a good conversation between friends”. The piano score’s frequent scales and arpeggios are demanding, right up to the reappearance of the main theme in the final measures.

During an oral school exam a music student was asked, “How many symphonies did Tchaikovsky write?” After a moment of consideration the student replied, “Three—the fourth, the fifth and the sixth.”

The student’s answer brings up an interesting question: how many symphonies were actually penned by the composer? Most music historians will tell you he wrote six, which is not entirely accurate depending on which music cataloguing system you source. On the other hand, most music critics will insist Tchaikovsky wrote only three symphonies worth listening to, among them his Symphony No. 5.

It’s no secret that Tchaikovsky approached everything he wrote with a sense of doubting-his-own ability. In fact, if it were not for his publisher, who rescued more than one of the composer’s works from destruction, they would never have survived. His Fifth Symphony, may very well have been one of these ill-fated compositions. At one point he expressed his compositional doubt in a letter to his brother Modest:“ I fear my imagination has dried up; I have nothing more to express in music…a complete resignation before fate.” Most historians believe that in part the quote is in reference to his failed marriage (it lasted a mere three weeks)plus an admission of guilt regarding his homosexuality; both were responsible for an attempted suicide.

But there was a glimmer of hope before he actually began work on the symphony. “I am exceedingly anxious to prove to myself…that I am not played out as a composer; new inspiration seems to have come.”

The symphony’s atmosphere is set in the introduction, a somber mood that occurs again and again throughout the entire work, quite likely a reflection of Tchaikovsky’s melancholic self-doubt. Despite this, the symphony has gone on to become one of the composer’s most colourfully orchestrated and celebrated works.