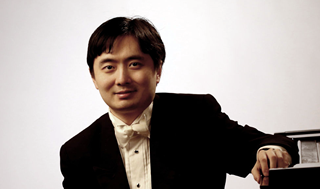 Twenty-eight-year-old award-winning pianist, Sheng Cai has embraced the keyboard tradition which epitomizes the greatness of the romantic virtuoso. His performances have touched audiences and won the praise of critics on three continents. Of his Chopin 1st piano Concerto the Toronto Star headlined: "Young pianist impresses at debut" and continued "a young man with real talent...from a clear, singing tone to a subtle sense of rubato to a judicious choice of tempi... some of the same quantities embodied in Pollini's approach". Honored with a number of prizes and awards, Sheng Cai has been described as a pianist" with great confidence... gave more lucidity, color and power" by the Birmingham News.

Since his debut with the Toronto Symphony at just fifteen years old, Sheng Cai has since performed a broad spectrum of concerto repertoire --- Bartok, Beethoven, Chopin, Liszt, Gershwin, Grieg, Mozart, Prokofiev, Rachmaninoff, Saint-Saens, Schumann, and Tchaikovsky with numerous orchestras as guest soloist such as Toronto Symphony, Quebec Symphony, Windsor Symphony, Fort Collins Symphony, New Bedford Symphony and Shanghai Symphony, as well as with the Calgary Philharmonic, Ontario Philharmonic. Jalisco Philharmonic of Mexico and many others. In Canada, Sheng Cai has also performed with numerous regional orchestra such Sudbury, Kingston and Kamloops Symphonies, and with the Winnipeg Symphony Chamber Players, among others. He has worked with conductors such as David Lockington, Keith Lockhart, Yoav Talmi, Glen Fast, Robert Franz. Bruce Dunn, Guoyong Zhang, Wes Kenny, Marco Parisotto and Eckart Preu.

In recitals, Sheng Cai has been heard in such North American venues such Stainway Hall in New York, Jordan Hall in Boston, the Cleveland Play House, the Modern Art Museum in Fort Worth, the Alys Stephens Center in Birmingham, CBC's Glenn Gould Studio in Toronto, and other distinguished venue in Stratford, Elora, Montreal and Winnipeg. In China, he inaugurated the Ningbo Concert Hall, giving both recitals and concerto performances. As a chamber musician, Sheng Cai has collaborated with a number of fine artists, including the Enso Quartet. Many of his performances have been broadcast on CBC Radio, and he has recorded a CD for the Canadian Broadcast Company. In addition, he was invited to take part in the filming of Franz Liszt DVD of Ophra Yerushalmi.

Sheng Cai is instrumental in advocating many neglected works that are peaks of the piano literature, works by composers such as Busoni, Enescu, Kablevsky, Medtner, Villa-Lobos and a number of his own works frequently shows up on his concert programs, his creative programming have made audience aware of such treasures of the piano literature deserves a wider audience.

Born in China, Sheng studied at Shanghai conservatory of Music and was a top-prize winner of the National Competition in 1998.The following year, his family immigrated to Canada where he began study at the Royal Conservatory of Music in Toronto. Sheng Cai earned his Bachelor of Music Degree under full scholarship at New England Conservatory in Boston. His teachers have included pianist Anton Kuerti, Russell Sherman and Hungkuan Chen.
‍

What possibly can be left to say about one of the most cherished and recognizable pieces of classical piano music ever written—Beethoven’s ‘Moonlight’ Sonata? Its legacy has been the subject of more descriptive narration than anything else penned by the composer. Its popularity has remained unchallenged since its creation.

The work is the second of a pair of sonatas completed in 1801 the composer labelled quasi una fantasia—in the manner of a fantasy. The first is lesser known than the second, an outcome that caused Beethoven no end of aggravation. It annoyed him knowing that the public placed the second over the first, and made it no secret that his regard for the second was less than stellar. It is also known that the sonata’s ‘Moonlight’ label, only ascribed five years after Beethoven’s death, was the result of German critic Ludwig Rellstab’s comment about the sonata’s first movement: “a vision of a boat on Lake Lucerne by moonlight.” There is no historical evidence that Beethoven ever saw Lake Lucerne.

It is speculated that the inspiration for the sonata’s first movement came from a scene in Mozart’s opera Don Giovanni where Giovanni kills the commander. Mozart’s music in this scene emotes a funereal, death-like impression, not unlike the Moonlight’s sense of sombre, free flowing gravity. French composer Hector Berlioz referred to the movement as “lamentation” and Beethoven’s student Carl Czerny called it “a mournful, ghostly voice sounding from a distance.”

It’s interesting to note that Frederic Chopin, after hearing the sonata, was inspired to write his famous Fantasise-Impromptu as a tribute to Beethoven.

Frederic Chopin often found inspiration for his abundant compositional output in his Polish Heritage. When he left Poland for Paris in 1830 he was bestowed a container of Polish earth, an attempt to ensure the composer never forgot his Polish birthplace near Warsaw. This heritage is realized in most of the music he wrote almost exclusively for the piano. However, the Scherzo No. 3—one of four scherzi he completed between 1833 and 1843—seems to have found its inspiration elsewhere.

During the summer of 1838, Chopin’s declining health demanded a change of climate. He journeyed to the Mediterranean where he took a small house in Palma, Spain. Soon afterward, a serious case of bronchitis forced him to leave and take up residence in an abandoned monastery in Valldemosa. It was here under the warm Mediterranean sun and among the palms, cedars, and olive trees he completed the third of the four scherzi—an inspirational geography completely foreign to his native Poland.

The Scherzo No. 3’s structure is somewhat remarkable compared to others of the composer’s piano works. It begins with a fierce main theme introduction, particularly difficult to play. This gives way to a transition that leads eventually to a singing cantabile. Then, after a series of arpeggios, the piece returns to its original theme.

As a child André Mathieu was unusually precocious, speaking his first words at age four months and taking his first steps before seven months. His father was a music teacher and composer, and his mother a cellist and teacher. From an early age Andre was fascinated by the world of music, and received his first music lessons from his father. In 1936, at a mere seven years of age, he performed his Concertino No.1 for Piano and Orchestra as a soloist on the CBC network. He was later given a grant by the Quebec government that enabled him to go to Paris and study piano.

As a composer Mathieu's style leaned towards the late Romantic school influenced by Debussy and Rachmaninov. He wrote many works for piano, among them the compositions of his youth: Trois Études (1933), Les Gros Chars (1934), Procession d'éléphants (1934), Trois Pièces pittoresques (1936), Hommage à Mozart enfant (1937), and Les Mouettes(1938), and Printemps Canadien (1940).

Completed between October and December, 1896, each of Rachmaninov’s ‘Moments Musicaux’ represents characteristics of the composer’s earlier musical offerings: Nocturne; Songs Without Words; Barcarolle; Etude; and Theme with Variations. Yet, although the pieces were composed as a set, each one exists with an individual theme of its own for solo piano. Elizabeth Wolff in her 19th Century classical piano publication described them as “true concert works best being served on a stage and with a concert grand.”

The works are early Rachmaninov, best described as “mood pictures” or perhaps “simple passing comments” between friends. In an interview the composer was quoted, "What I try to do, when writing down my music, is to make it say simply and directly that which is in my heart when I am composing." Simple and direct perhaps, but nevertheless demanding a sophisticated virtuosity on behalf of the performer, a reflection probably of the composer’s own prodigious talent as a pianist.

The first of the six opens with a soaring melody that gives way to an improvised passage ultimately ending with a return to the beginning melody.
‍
‘Moment’ no. 2 is an etude with a distinctly difficult Rachmaninov triplet figure played by both hands, a testament to a pianist’s skill.

The third piece is best described as a march played first with nobility and stately precision, then with demanding staccato octaves in the bass.

Number four is another etude with a lyrical rising melody which quickly gives way to a second melody. Both culminate into a sudden and explosive ending.

The fifth moment is a barcarolle, gentle, loving and introspective; it is the single tranquil piece in the set of six.

Finally, another energetic etude, a gushing expansive melody that some critics have suggested may have been inspired by Chopin’s ‘Ocean Etude’.