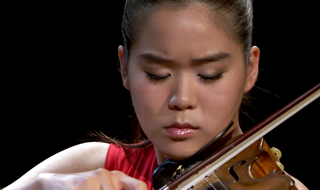 In an era when technical perfection is a given, the spotlight inevitably shifts to interpretation, and Esther Yoo’s playing has been described as ​”mesmerising”, ​“soulful“, “spellbinding“, ​“intensely lyrical”, and ​“taking her audience into an enchanted garden.” She performs with many leading conductors – including Vladimir Ashkenazy (with whom she and the Philharmonia Orchestra recorded the Sibelius, Glazunov and Tchaikovsky concertos for Deutsche Grammophon), Gustavo Dudamel, Esa-Pekka Salonen, Thierry Fischer, Vasily Petrenko, Karina Canellakis and Andrew Davis – and orchestras such as the Philharmonia, Los Angeles Philharmonic, BBC Symphony Orchestra, Seoul Philharmonic, Deutsche Radio Philharmonie or the Royal Liverpool Philharmonic. She has also performed at a range of prominent festivals including the BBC Proms and Aspen Music Festival.

The Royal Philharmonic Orchestra appointed her as their inaugural Artist-in-Residence in 2018, through which Esther participated extensively in educational and outreach projects, alongside their concert performances in London and across the UK.

Esther has appeared in recital at Lincoln Center and Wigmore Hall, and in 2018 she featured prominently on the soundtrack and accompanying Decca disc of the feature film, On Chesil Beach. The piano trio, Z.E.N., (which she co-founded together with fellow former BBC Radio 3 New Generation Artists Zhang Zuo and Narek Hakhnazaryan), tours widely in North America, Europe and Asia. They chose works by Brahms and Dvorak for their first recording and are currently preparing their second recording which, like the first, will be released on DG.

Esther may be unique among classical soloists in being fully tri-cultural. She was born and spent her earliest years in the U.S., before receiving her education in Belgium and Germany, but she always retained her family’s proud Korean heritage. Having authentic roots in three continents may have contributed to her versatility and exceptionally broad range of expression, and was unquestionably a factor in making her one of the most articulate and gifted communicators in the field of classical music.

She began playing the violin at 4 and made her concerto debut aged 8. At 16 she became the youngest prizewinner of the International Sibelius Violin Competition and two years later she was one of the youngest ever prizewinners of the Queen Elisabeth Competition in 2012. In 2014 she became a BBC Radio 3 New Generation Artist and in 2018 Classic FM featured her in their Top 30 Artists under 30.

Dedicated to Tsar Alexander I of Russia, the G major sonata was written between 1801 and 1802. At the time, Beethoven was coming to grips with his inevitable deafness and although he had contemplated suicide, he nevertheless resolved to overcome his distress. “I will seize fate by the throat— it (deafness) will certainly not crush me completely.”

Ironically, the work has been nicknamed “the charmer” due to its sunny spirit almost bordering on gaiety; this may have been the result of the pleasant summer Beethoven spent at his favourite haunt, Heiligenstadt, outside Vienna.

The three-movement piece, typical of the composer’s middle period, is infused with a combination of playfulness and ferocious intensity.  Of all Beethoven’s great works, The G major violin sonata best illustrates his famous quote: “Music is a higher revelation than all wisdom and philosophy; music is the electrical soil in which the spirit lives, thinks and invents.”

Although Bruch’s popular Violin Concerto in G Minor and his Scottish Fantasy have been his lasting legacy, he did write five shorter works for the violin including the 1890 Adagio Appassionato. The piece was originally intended for his close friend the brilliant violinist Joseph Joachim, a musician who was no stranger to some other composers of the time, among them Johannes Brahms and Anton Dvorak. Joachim was a committed champion of Bruch’s music, and his public popularity as a concert performer almost guaranteed a receptive audience for anything Bruch produced.

The Adagio Appassionato is a deeply impassioned, single-movement composition which Bruch described as “one of my best works.” From the very outset this virtuosic showpiece displays intense feelings, a sequence of high notes leading to a succession of one poignant melody after another.


Giuseppe Tartini (1692-1771)
The Devil’s Trill
Travelogue writer Joseph de Lalande’s 1769 account of how Tartini’s, Devil’s Trill, was composed rivals most publicity masterminds. Lalande attributes the following to the composer:
“One night I dreamed I had made a bargain with the devil for my soul. I gave him my violin to see what he could do with it. Great was my astonishment…a sonata more beautiful than anything I had conceived…and I awoke. At once seizing my violin, I tried to retain the sounds…in vain. The music I then composed was the best I ever wrote—the Devil’s Sonata—but yet inferior to the one I heard in my dream.”
Of all of Tartini’s violin works, The Devil’s Trill Sonata is best known. After a leisurely opening, ever-new variations of earlier melodies culminate, alternating high and low pitches.

‍
John Williams is an American composer, conductor and musician, widely regarded as one of the greatest film composers of all time. In a career that has spanned nearly seven decades he has composed some of the most popular, recognizable and critically acclaimed film scores in cinematic history. The Schindler’s List Theme is a Williams-Spielberg collaboration that produced a memorable moment between the two artists. When Spielberg asked Williams to write the music for his 1993 historical drama Schindler’s List, Williams, who was completely captivated by the film, said, "You need a better composer than I am for this film.” Spielberg’s answer: “I know, but they’re all dead.”

The ensuing original score and songs written by Williams garnered him an Academy Award, the British Academy of Film and Television Arts Award, and a Grammy for best soundtrack—a stellar record for a composer who doubted his own abilities.

The Theme From Schindler’s List has become one of the most recognized works in modern music, particularly the violin solo. It is also no stranger as background music for a variety of competitive, award-winning figure skaters.

As is the case with others of Tchaikovsky’s compositions, the origin of his C major Valse-Scherzo is somewhat mysterious; the work’s actual existence remained in doubt until evidence of it was found in a letter dated February 3, 1877. The letter was from violinist Josef Kotek addressed to Tchaikovsky thanking him for the honour Kotek was given of orchestrating the Valse-Scherzo. Prior to that letter, there had been no mention by anyone, including Tchaikovsky, of the work’s existence.

It’s first performance was in September of 1878 in Paris. Since then the whereabouts of Tchaikovsky’s autographed score for the piece is unknown. However, a full copy of the score, probably the one orchestrated by Kotek, was auctioned in Germany in 1979 and is now in an owner’s private collection.

The piece is characterized by Tchaikovsky’s mastery of the waltz, reminiscent of his earlier Serenade for Strings. One critic suggested the work would fit nicely as the middle movement of a full concerto. It’s performance history is extensive, including recordings by David Oistrakh, Itzhak Perlman and James Ehnes.